Why Vertigo Is A Satire: An Essay

Vertigo. The come-churning journey of James Stewart as he spirals through a nightmare of sexual frustration along with the film, right down to the unbearable clitmax. An orgy of gorgeousity so splendid that halfway through it, my appearance actually changed slightly, and I changed my name to ‘Madeleine’. An odd experience, I know. But bare with, this is all part of the satire. A satire so intricately crafted that nobody – not even the greatest of film scholars – have realised it’s a snickering lampooning work of satirical sublimeness. The vertigo shot in of itself is a satire of the very act of sex - as it penetrates the frame. The fact that nobody else sees this, or even can sense the elements of the satire oozing beneath the surface, is all part of the satire itself. Herein lies its genius.

The first time I saw Vertigo, I actually developed a fear of heights and began to stalk a woman to unimaginable ends. I became plump and large, started talking in a dry English accent, only wanted to have sex with blondes, and for some reason all of my chums named me ‘The Master of Suspense’. That’s right. Vertigo is such an intensely psychological, physical, spiritual and physiological experience, than when you watch it, you experience metamorphosis. After seeing Vertigo, I became Alfred Hitchcock.

And yes, this is all part of the satire.

Again, it all adds to the satire.

You may not think it does, and in fact, you may completely disagree with me about this film being a masterpiece of mockery – but, like I said before: that is the point of the satire itself.

It’s so effortlessly satirical that nobody actually classes it as a satire. This is of course symbolic – and if you think it’s not, then it’s a metaphor about somebody not understanding a piece of symbolic imagery – and thus a symbol: a ‘post-modern symbol’, if you will. And a satire.
at 13:11 No comments: 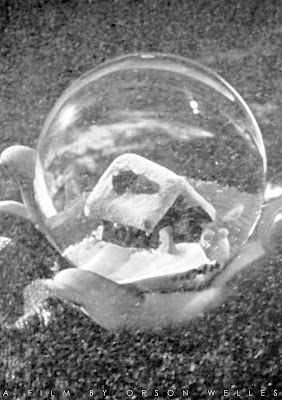 There is a moment in Citizen Kane where I actually turned into a rosebud. Yes, I began to grow petals in the most awkward of places, and just for irritation, pollen began to manifest itself near my scrotum – an awkward place considering that bees would buzz near me and gently nibble near my rather large appendages.
Oh, Citizen Kane. Magnum opic satire of society, an exploration of voyeurism, a prediction of the 9/11 disasters, a cure for HIV. Alas, Citizen Kane is many things, but great is certainly the most definite compliment one can apply to it. It is a jewel of cinema, a diamond of the lens, a ruby of the framed image, a platinum disc of mise-en-scene, a golden ball of intricately placed memories – yes, when viewing this grandiose masterpiece, the spectator isn’t merely viewing a filming, but watching a dream, watching life and the inner working of the subconscious unfold, specifically that of a bee nibbling on pollen that is dangerously close to my testacles.
at 11:08 No comments:

Why Bergman Said "Ingen" To The Oscars: A Filmic Essay

As I'm sure none of my many readers are aware (for once again, it is I that carries the filmic wisdom), the master of the lens Ingmar Bergman, upon discovering that his 1957 masterwork Wild Strawberries was nominated for the Academy Award for Best Screenplay that year, wrote a letter to the Academy Awards ordering them to take their dirty fingerprints off of his piece of pure cinema, calling the Oscars a "humiliating institution."
Which, of course, they are!! It is commonly suggested that all directors dream of earning an Oscar, but to the upper echelons of the cinematic hierarchical system (e.g. Bergman, Kubrick and moi), getting an Oscar is the filmic equivalent of being given a second-hand lollipop by Michael Bay's dumb children and a two-disc mint-condition copy of Transformers!!!!
Quite simply, Bergman's magnificent achievements in cinema are far beyond the league of the types of films the Oscars consider award-worthy. Why, *heh heh*, as I have quipped many a time, I bet the Academy knows not even what indeed a strawberry is, let alone a wild one. Next you'll be telling me Andrei Tarkovsky never won an award. Oh wait.
Oh, what's this? Bridge on the River Kwai won Best Picture that year? Ha! Joke's on you, ignorantians. The director's not even foreign. David Lean? Pfft. Might as well have directed Transformers 3. And I'd wager many a penny that you've never even heard of Jean-Luc Godard. I suppose you think it's some sort of brand of skin care, hm?
You may believe you had redeemed yourselves by giving four of your awards to Woody Allen, almost certainly because you think he is the master of satire. And while Allen's works are indeed satirically charged, and the man is a master of the film reel, he is not the master of satire. That right belongs to Kubrick - who you never gave a single Best Film or Best Director award to.
This is beyond inexcusable, considering Kubrick is such a connosseur he deserves to win the Academy itself. He is above the "Oscar" in every conceivable department, a man who doesn't make films - he makes visual  poetry. He makes lunches for the eyeballs, dinners for the retinas - feasts for light itself. Kubrick's flawless flow of visceral and visual versification can only be described of a concerto of the lens itself, a Mozartian deity of the film cell, a Beethovenesque celebration of mise-en-scene. The man leads the select few who carry the Kubrick eye; a cult, a power, that can only be carried by those who truly understand pure cinema.
Do you carry the Kubrick eye?
*scoff*, of course not. I bet you carry the eye, which (needless to say) is barely anything in comparison to the godly Kubrick eye. Transformers is so unspeakably horrible that it cannot even be categorized as a satire - that's just how bad it is. In fact, calling it rape would be a compliment - it is the polar opposite of film.
To those at the top of the corporate film ladder such as myself, is only allowed to be referred to as Satan, an unerathly evil come to spread it's spew all over cinema today. For anyone without the intellect to carry the Kubrick, Bergman, or Trakovsky eye, go back to your pit of destruction, death, and Transformers!!!!
at 17:14 No comments:

It was Arist Plat Socrates that once said: “The only true wisdom is in knowing you know nothing” – a marvellous quote I feel, a statement that wraps up life into a small paper-thin bundoir and tosses it into the air for all to observe. On a sidenote, Woody Allen’s Love and Death is a marvellous and splendid satire. The word ‘splendid’ is so well suited to the films of Woody Allen because when observed thoroughly, one can see references to Eve being tempted to eat the apple, and thus causing sin to spread right across the world. The films of Woody Allen can only be viewed whilst sipping on a glass of wine. Il est necesarry, as the French would put it. One must feel slightly intoxicated but never more so. Remember that quote I put at the beginning? Exactly.Oh how Woody Allen’s moving paintings are mere verisimilitude to the testicles; I am so greatly reminded of the juxtaposition of thought that is often ambiguously unfolded in the great Cinematic Installations of connoisseur and transcendental filmmaker, Ingmar Bergman.Imagine a small bird fluttering its wings and choking on a worm. It is in a forest. It is scared. The bird, that is, not the forest. Yet, it knows that God exists and is ever so familiar with the great languid poetry of Psalm 23: “He makes me lie down in green pastures, he leads me beside quiet waters, he refreshes my soul” – if you understand this, you will understand the films of Woody Allen, and thus will be moved by Love and Death. If you don’t, go watch Transformers. That is all.

There is a moment in Eyes Wide Shut where I actually reached orgasm. Naturally I commended my unusually big appendages, but the film was one step ahead of me. As it turned out, my experience was short-changed; the film's moral is that it's not about the rub, it's about the lubricant.

Ah, Eyes Wide Shut. One of the greatest films ever made for its sharp social satire; a masterpiece simply stuffed with references and metaphors that either take a dedicate film buff (*chuckle*, such as moi) to decipher, or things that only a complete idiot (one that reaches the lower boundaries of the likes of Mark Kermode) would miss in this masterpiece. This is a masterpiece; a sex film for intellectuals; it nourishes on the brain like food for thought and vice versa, less a wet dream than a wet nightmare.

The busty Tom Cruise and the macho Nicole Kidman play a couple in who spend a night in Majimanor, with Kidman opening up to Cruise about a time earlier on in their relationship where she did cheat on him did. The rest of the movie is just Cruise wandering about. A fantastic, exciting premise.

The film is a purely experiential one; the film has such an abstract beauty to it that after watching it you wonder if it was but a figment of your imagination. And, of course, we simply can't ignore the visionary Kubrick's various clues in the film; you remember that shot where Tom Cruise is walking to the Rainbow shop* and there are lampposts in the background? Those lampposts, though initially percieved as erect penises, are actually slightly bent at the tip - a hint of Cruise's questionable sexuality? And I mean the real life Cruise, not the character. Of course, this was all Kubrick's intention.

And of course we must discuss the Illuminati issue. Now, many Kubrick fans have come up with a theory that Eyes Wide Shut is actually one big metaphor for the Illuminati. And I'm here to tell you you're absolutely right, and this was Kubrick's intention. And, of course, *chuckle*, of course the Illuminati reacted by beating Kubrick to death, which is how he died, of course. I thought everybody knew about that one, but apparently my canyons of intellect have developed sooner than everyone else's.

Back to matter, Eyes Wide Shut; a challenging masterpiece by the satirist, visionary, connosieur, and cinematic genius Kubrick. This is one for his true disciples; it will not bode well for those who do not carry the Kubrick eye, but those guys are dipshits. Kubrick's final film is his magnum opus, an ejaculation of art, a two-hour orgasm, a group sex expert, a doggy-style challenger. If you can't cope with it, it only goes to show that you hate cinema and you should feel bad.

*The Rainbow shop itself is an allegory for plot holes in the Bible. Also you can see Michael Jackson's ghost. Of course, this was all Kubrick's intention.
at 11:13 No comments: